By Adam Baumel candidate for NY State assembly in the 64th district. 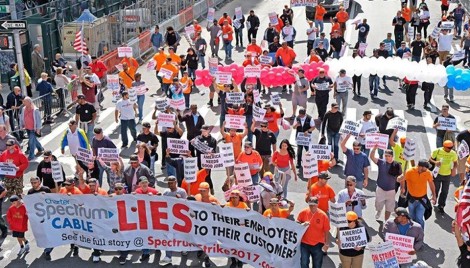 I am not a union member, and I do not recall anyone in my family that held union cards when I was growing up. But you don’t need to belong to a union to benefit from the work unions have done to create the modern working conditions we’re all accustomed to. Unions fought — quite literally — for safer working conditions, for the eight-hour day, for weekends, for a living wage.

I make these points because despite how much unions have done for the American worker, corporations continue to do everything possible to fight against unions, and create a disposable workforce. We see this nationally, but most alarmingly we see this happening right here in our city.

Since March 28, 2017 — over a year — 1,800 IBEW Local 3 workers have been on strike from Charter Spectrum, currently the longest strike in America. Over 1,800 families right here in New York City are struggling to pay bills, and looking to just get a fair shake. Now, more than 500 days since the strike started, Charter has yet to come to the bargaining table in good faith to make a deal. Those families are still waiting for relief.

Typically when a strike has persisted this long it is relatively commonplace to count on local, state, and federal elected officials to place pressure on the corporation to make a deal. However, only a handful have done so to this point, and with no effect. All of this starts to make sense when you closely examine where Charter, through its Communications PAC, has contributed to elected officials over the last 8 months.

Since mid February of 2018 the Charter Communication PAC has contributed nearly $200,000 to state and federal New York legislators of both parties. All of this information is public, but this information is often overlooked, hidden from most except for diligent searching of campaign contributions. This is a situation where both parties are accepting PAC money from a union-busting corporation in the most union dense state in the country.

Once I knew about what was going on there was no way I was just going to let this happen, and continue to watch 1,800 workers and their families suffer in media silence. As a Navy veteran, I learned in the service that when you see something wrong you address it or you bring it to the attention of someone ranked higher than yourself to address it. At this point I knew what I must do.

On the 10th of August I started a petition calling on all elected officials to donate the PAC money they received from Charter Communications to the IBEW Local 3 Striker Fund, which was setup to support the 1,800 families of those on strike.

I am calling on everyone to please consider signing the petition to apply real pressure on all of those elected officials who seemingly have no problem accepting money from a corporation that treats workers so shamelessly, and to put those funds to good use by donating them to the 1,800 families that have been on strike for over 500 days.