This past weekend the New York Times did a front-page exposé about the working conditions at Amazon, the biggest company in America. It talked about such things as Amazon’s forcing women who just had a miscarriage to report for work the next day, making people work in a 100-degree warehouse with no air conditioning while ambulances were stationed outside, and encouraging employees to report on coworkers’ shortcomings, even if they had to make them up. It seems to have caught Amazon CEO Jeff Bezos by surprise. As news of the article spread like wildfire, Bezos was quick to issue a mea culpa and say that he was shocked that such things were happening at Amazon. 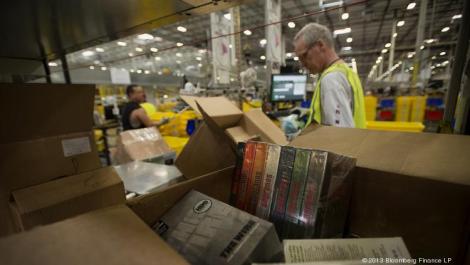 But who are we supposed to believe? The new, warm and fuzzy Jeff Bezos, whose employees are apparently so happy they do cartwheels down the hallway? Or the Jeff Bezos who perfected the art of undercutting his competition by selling products at a loss in order to gain market share? And who removed all of Hachette’s books from Amazon’s website in order to force them to pay Amazon a higher percentage of their sales?

How about all the Amazon employees quoted in the Times article?

For anyone who actually works for a living (or has had to look for a job), this article was no surprise. The American workplace has become a race to the bottom at least since President Reagan fired striking air traffic controllers. This has been followed in more recent times by union buster (and possible Republican presidential candidate) Scott Walker demonizing public employees and cutting their pensions as governor of Wisconsin.

In fact, the last 35 years have been an object lesson in how corporations collude with Republicans to apply downward pressure on wages.

During the last 35 years, most people’s wages have either been stagnant (when adjusted for inflation) or have actually gone down!

Not only that, but benefits that were once taken for granted are now increasingly hard to come by at all.

Health insurance? Not when there’s Obamacare (which, of course, you have to pay for yourself).

Vacations? Not when you’re a freelancer.

In fact, an entire industry has sprung up for the sole purpose of allowing companies to get around those pesky benefits. It’s called the temp industry. (And you thought they existed to find people jobs!)

You can also be let go at any time, for any reason, with no notice.

Try asking a member of Congress to work under those conditions!

In a kind of sweet revenge, though, the temp agencies are now finding themselves being “outsourced” as employers can go directly to LinkedIn to hire people.

But that doesn’t change the poor conditions endured by many workers today.

For example: There has been much debate recently over the $15/hour minimum wage for fast food workers. That comes to $31,200/year, based on a 40-hour work week. But one study has shown that in order to maintain a “middle-class lifestyle” in New York City, one needs to make $75,000/year. I’m not talking about living in the lap of luxury, I’m talking about being able to afford things we used to take for granted: a smart phone, cable TV, a two-week vacation and eating in a restaurant occasionally.

And that’s if you’re single. God forbid you have a family to support! No wonder people who work at Walmart have to go on food stamps!

Our country has become a victim of what’s come to be known as “quarterly capitalism.” That is, doing whatever is necessary to make your quarterly profits look good to investors. (And this usually means getting rid of workers, because that’s the easiest way to boost your bottom line.)

Remember how companies were supposed to use their record profits to create jobs? Instead, they used it to buy back their own stock and pay their executives even higher salaries and bonuses (even when their companies did poorly).

As Labor Day approaches, it’s more important than ever that we rebuild the labor movement in order to address some of the serious injustices in our workplace that have occurred over the last 35 years.

And on Election Day next year, we need to elect Bernie Sanders as president. He’s the only candidate who understands the huge income inequality that exists in our country and isn’t afraid to do something about it.

Paul Hallasy is a New York City-based comedian, writer, actor and singer. He performs regularly in New York City and has performed at clubs and colleges across the United States and around the world. A favorite of both gay and straight audiences, he was recently named one of “7 Funny LGBT Comics You Shouldn’t Have Missed” by The Advocate. He has appeared as a pundit in newspapers and magazines (The New York Times, New York magazine, National Journal), and on TV (CNN, CBS Evening News, CBC’s Connect with Mark Kelley), radio (WNYC, Watson n Watson), websites (GRITtv, Gridskipper), and the stage (Laughing Liberally). He is also the author of a book called New York Trilogy.