Our country once had probably the best manufacturing industries in the world.

As just about everyone can see, most of those jobs are now overseas.

For example, since 2000 more than 50,000 factories have closed their doors. The country lost 3.5 million manufacturing jobs, of which half a million were in high-tech industries such as telecommunications and electronics.

We are importing just about everything we use in our daily lives and then wonder why we are lacking jobs.

This letter is not focused on why manufacturing is vital to the economy, but if you have doubts, just go on Google and see for yourself all the evidence and studies coming from credible and professional sources which say that, without manufacturing, simply put, our country is doomed (1).

The addiction to cheap foreign labor at any price has gotten so extreme that, even as we speak, the MTA is planning to use Chinese steel in a massive project to replace the deck on the Verrazano-Narrows Bridge, even though, as the New York Times noted in an editorial on August 4th, 2013, “China has a very well-deserved reputation for producing inferior and often dangerous products.”  That reputation was validated when California bought Chinese steel to renovate San Francisco’s Bay Bridge; a decision which led to delays and huge cost overruns because of faulty welds by the Chinese steel manufacturer (2).

The MTA’s Thomas Prendergast says that it was forced to outsource to China because there was no American steel company able to supply a product capable of “satisfying the requirements for a project of this scope and complexity.”

That turns out not to be true. In fact there are two steel companies, both located in Pennsylvania, 100 miles from the Verrazano Bridge, that can produce steel to the MTA’s specifications. 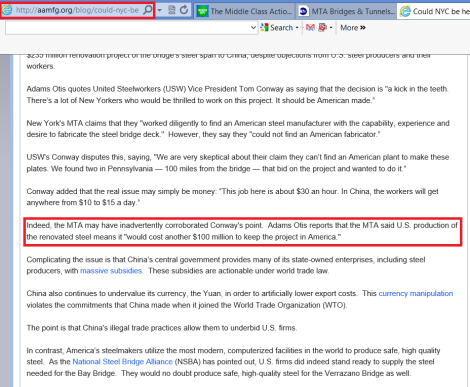 So, our questions to MTA are:

P.S. In California, the state also chose a Chinese manufacturer – Zhenhua Pot Machinery Co. of Shanghai – for the steel used in the San Francesco-Oakland Bay Bridge.  The results were cost overruns and expensive, months-long construction delays due to deceit of the manufacturer, which knowingly claimed a delivery schedule it could not meet.

The  American inspection firm MacTec Engineering and Consulting, which the California Transportation Dept. assigned to the factory, reported early on that as many as 65 percent of the more than 30 welded panel sections his office examined – either visually or using ultrasonic testing – failed to meet specifications.  Eventually welds on more than 100 panels had to be inspected and repaired. The experience has raised the questions about whether California taxpayers are getting substandard components built into their bride that could wear out prematurely and require costly repairs in the near future.